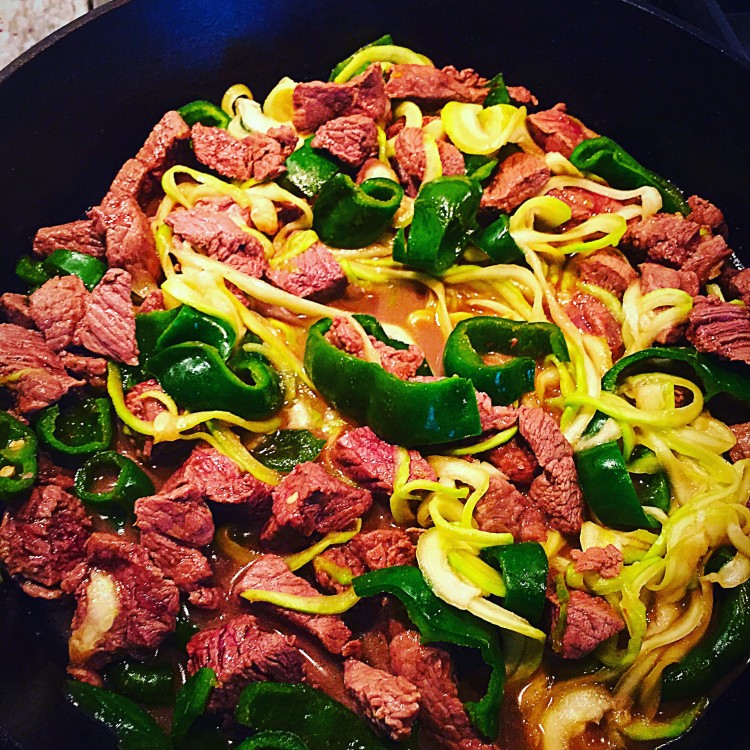 Experimenting with what’s left in the refrigerator

Have you ever had one of those days where time just flies and before you know it the dinner hour has arrived?  You don’t have any thought out meal plans and very little in the refrigerator?  I had one of those evenings recently and decided to do what I’m sure most of us have tried.  Chop up what you have and throw it all into one pot and see how it turns out.  Luckily for me, my experiment was a success :).

What I had left in the refrigerator that day was a large zucchini, one green bell pepper and, fortunately, a piece of lean flank steak.  In general, when I’m rushed for time, I immediately think of something like a stir-fry in one pan. A stir-fry is ideal since I don’t want to deal with too many steps or any major clean up afterwards.  So that’s what I did!

It would have been nice to have a few other items like an onion and maybe some mushrooms to add more flavor but nope – stuck with just the one zucchini and the one pepper.

To start, I seared the flank steak in a little olive oil just to give it some color. I added the green pepper strips and continued to cook for another couple of minutes adding salt and pepper to taste.  I needed a little bit of liquid to continue the cooking process, so I added a cup of low-fat, low-sodium chicken broth that I found in the pantry.  Fortunately, there are a few things I usually have stocked in my pantry.  Once the broth was added, I reduced the heat to low/medium and let the liquid reduce, and the flank steak and peppers continue to cook. Once those were cooked, I added the zucchini noodles at the very end since.  These are done in just a couple of minutes.  And voila, dinner is served!

I served the stir fry/stew or call it whatever you like over some rice.  If I had more zucchini noodles, I would have served the stew on its own – a delicious and healthy low carb option with just those vegetable noodles.

So the next time you are rushed for time with very little in the refrigerator, try throwing it all into one pot and see how it goes!