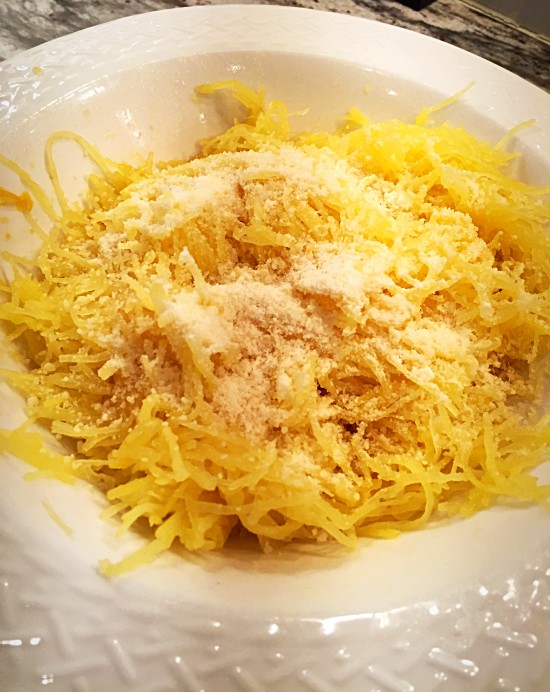 A Seasonal Fall Vegetable with Versatility

Spaghetti squash is an excellent Fall vegetable that is low in carbohydrates and a great substitute for pasta. With only ~40 calories per cup, cooked and 10g of carbs, it saves you significant calories and carbs over traditional pasta (220 calories, 43g carbs).  It can easily be prepared either by baking in the oven or cooking in the microwave.  Since I’m pressed for time often, I prefer to cook mine in the microwave – an easy no brainer.

How to Cook Spaghetti Squash in the Microwave

It’s hard to cut through the thick hard skin of a spaghetti squash.  It’s very easy to have a mishap when doing this.  To avoid the risk of cutting yourself, I prefer to leave my spaghetti squash whole.  Instead, I very carefully pierce the squash with the point of a sharp paring knife in several places all over (remember to wash the exterior of the squash before doing this).  You should have created slits that reach deep enough through the skin and flesh into the center cavity allowing steam to escape.

Place the spaghetti squash in a microwaveable dish and cook on high for 10 to 13 minutes or until a fork easily pierces through the skin.  Make sure to rotate the squash halfway through to ensure even cooking.

Once cooked, let it rest for a few minutes before attempting to cut in half.  When ready to cut, use an oven glove to hold the squash since it will still be hot. Steam and liquid can escape from the inside when you slice into it, so be careful.  Cut the spaghetti squash in half lengthwise and scoop out the seeds with a spoon. Once you have completely removed the seeds, take a fork and gently scrape the inside of the spaghetti squash.  The flesh will pull away in strands just like spaghetti.  Continue until all the inside flesh has been scraped out. I decided to toss mine in a small amount of hot olive oil with garlic and finish with some grated parmesan cheese. Simple but delicious!!

Comment below and let me know how you make it! Here are some other great recipes from around the web: