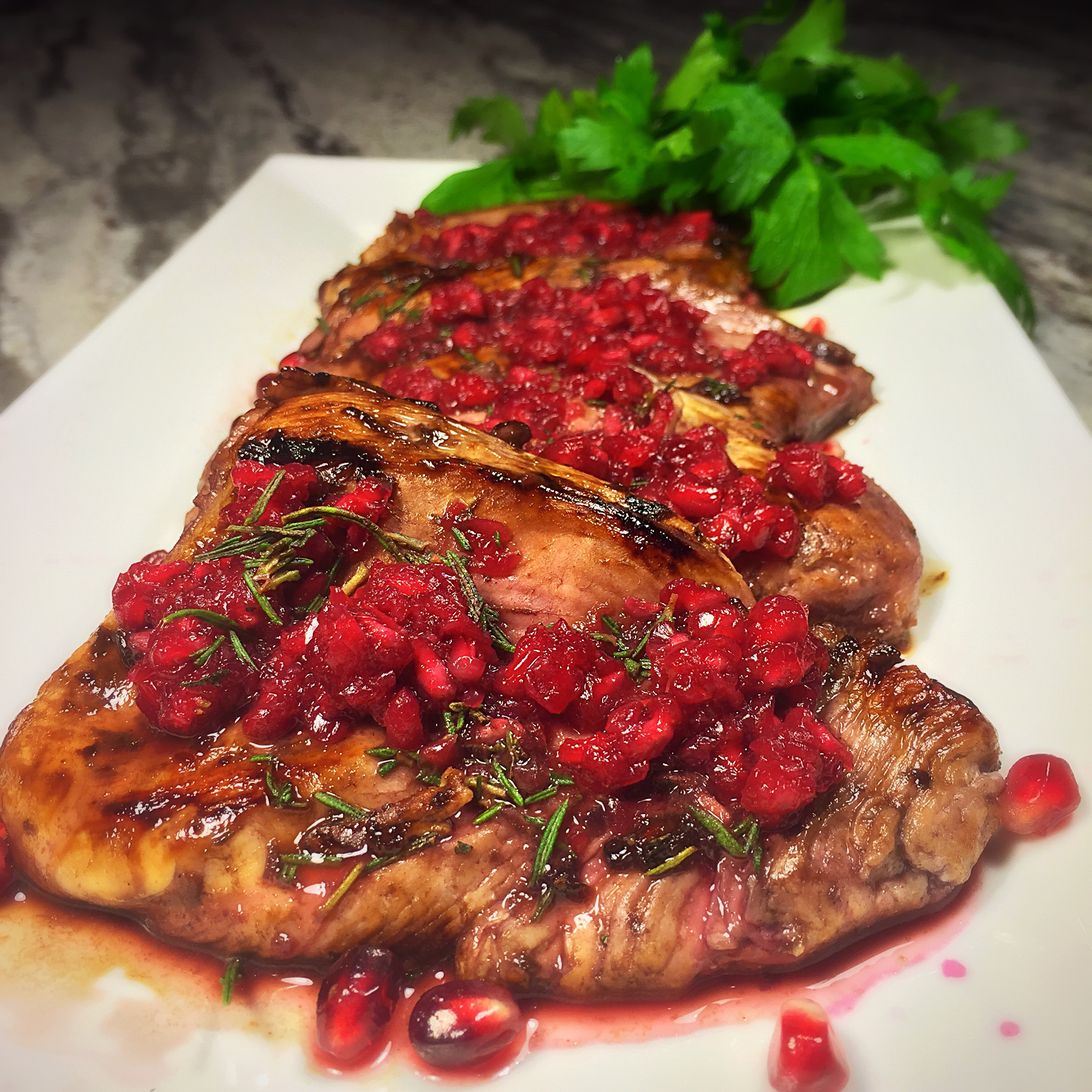 Pomegranates are in season!

I love pomegranates! Those juicy ruby red seeds burst in your mouth with an explosion of flavor. The least favorite thing is it can be quite messy getting the seeds out, but I learned a great trick to minimize that. Cut your pomegranate in quarters. Fill a deep bowl with cold water and remove the seeds from each section underwater. The white pith floats to the top, and the seeds sink to the bottom of the bowl, making it easy to separate the two.

I enjoy eating the seeds just as they are, but I thought it might be interesting to try them out in a recipe. The first thing that came to mind was a fruit reduction paired with a protein.  I had boneless chicken breasts already in the refrigerator.  Perfect!

Fruit reductions are prepared by combining fresh or frozen fruit, fruit juice, and sugar. The mixture is heated until most of the liquid has evaporated, leaving a thick syrupy sweet sauce. As with anything high in sugar, the calories can be too high. So, I made a few substitutions keeping the calories in check producing a “Skinny” guilt-free version. Details below!

Here’s how it went …

After separating the seeds (using that cool underwater method), I placed about one and a half cups in a mini chopper/blender. I love using this little mini food processor… less clean-up!  I was careful not to liquefy the pomegranate seeds because I still wanted some small pieces. Next, I added my puree into a small saucepan along with the juice of 1 lemon, 1 teaspoon of lemon zest, 1/4 cup of low sodium chicken stock (you can use white wine instead), 2 teaspoons of Truvia baking blend sweetener and 1/2 teaspoon of cinnamon.  I brought the mixture to a boil and reduced to a low simmer to let the liquid slowly evaporate. On to the chicken prep …

I seared the chicken on both sides until they were nicely golden brown and seasoned with the chopped rosemary.  The pomegranate sauce was cooking down slowly but still had some liquid in the saucepan. I spooned some of the pomegranate liquid onto the chicken while it continued to cook keeping it moist to infuse flavor.

Once cooked, I transferred the chicken breasts onto a plate and spooned the thickened pomegranate reduction over it.  Ready to serve … Yup, it’s that easy!   You can place the extra sauce in a bowl in case anyone wants a little bit more :). This dish is so elegant in appearance that no one would know how little effort it took to prepare!  Take advantage of the pomegranate season!  Try another protein instead and let me know how it comes out in the comments below.

I may try this recipe with a lean cut of flank steak next!